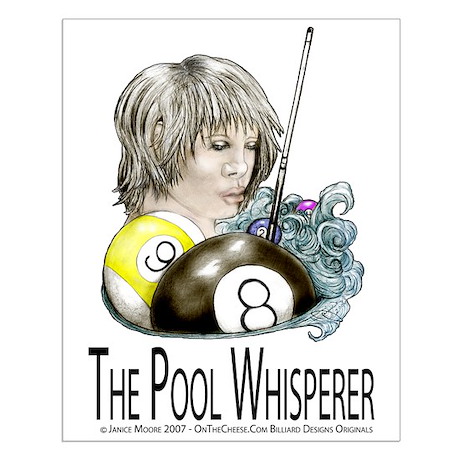 The Colorful History Of Pool & Billiards In The Movies: Part 1

The Music Man : "Ya Got Trouble....
That starts with a capital 'T' that rhymes with 'P' and that stands for Pool!"

"Any Boo can take and shove a ball in a pocket."

A Brit billiards musical? Think the Rocky Horror Show for pool junkies and you understand why people seem to either love this one or absolutely hate it.

The two main characters of this campy cult classic are based on snooker legends Jimmy White and Ray "Dracula" Reardon of the early 1980s. The story reads as follows:

Both of our main characters are a bit strange. Cocky seventeen year old Billy Kid lives in a fantasy world. He thinks he is a cowboy. Seven times world champion Maxwell Randall sleeps in a coffin. Both vampire and cowboy play a mean game of snooker; and they both have a big ego. Here's where scheming minds with their own hidden agendas jump into action and a high-stakes game is staged between the two at Supersonic Sam's Cosmic Café. The suspense is spiced up with underhanded double dealing, troubles with the local mob, a conspiracy to get Billy to take a dive and in the end the loser can never play snooker again.

"10 years later the game is finally over"

The thrilling new movie 8-Ball, is a billiards crime drama expected to be released at the New York Film Festival in September, 2013. Expectations seem to be high for this based on the true story of a mobster film which is comprised of a complicated plot full of surprising twist and turns.

Everything goes sideways for neighborhood mobster and pool player, Ramone Torzo, who finds himself abandoning his home in Queens, New York when a fixed game of 8-ball turns into a nasty situation. 10 years later, Torzo is comfortably settled in Hollywood with a new life that does not include billards, the game he so passionately loved being one of the many things he had to leave behind. But it is hard to escape your past as the ex-mobster pool player discovers when he is recognised by a local police officer who also happens to play pool.

When Will The Movie 8- Ball Be Released?

The Mechanics of the Trick Shots in PoolHall Junkies

Johnny “Sidepocket Kid” Doyle's gift came natural; he simply knew how to move on a pool table. His uncle Joe had backed him from one game to the next since he was a teenager, profiting from Johnny's masterful use of a cue with the aim to "educate" him on how to hustle. But Johnny didn't want to be a hustler. A new Men's Pro Tour had started up and Johnny wanted to go pro, but you had to be invited. And, Johnny never received an invite.

15 years later, in the middle of a game that Joe is backing, Johnny discovers how his underhanded dealing backer robbed him of his dreams so many years ago. Leaving Joe high and dry to deal with the consequences of his latest attempted hustle, Johnny walks out of the poolhall. He tries a job in construction, but his boss having some odd ideas about "pool hustlers" wants him to do some shady work for him. Johnny quits and it is quite the scene when his law-school graduate girl friend, Tara (played by Alison Eastwood) finds out. Tara assumes that he just quit because of his, in her opinion, selfish obsession with the poolhall and Johnny does not even try to explain himself. As their relationship takes more twists and turns Johnny tries his hand one last time at a normal job selling mobile homes, but he is not very good at it. He is a pool player and pool players have to play pool for the same reasons a dancer dances and a singer sings, though he does make a commendable effort in trying to be something he is not to please his girl. That is until Joe strikes out at his little brother and Johnny is forced to play for the biggest stakes he's ever played for against the current #13 pro player on the Men's Pro Tour.

Andy and I have seen this movie. Our opinion of the movie? Put it to you like this, the year it finally came out on DVD, before the Christmas holiday was over the poolmouse and hubby had their own copy on dvd added to their video library of pool and billiard movies. It's a fun and exhilerating movie! But not a movie for small ears.

Lots of fun! Full of Action, Fast Pace, one of the best billiard movie releases in years to emerge on the scene.

No one wins in W.C. Fields first film debut as an actor and screen writer. This silent movie is the short romantic slapstick comedy of two rivals constantly fighting for the affections of the girl they both love. The real trouble begins when the two pool sharks decide to settle their dispute in a gentleman's game of pool. The game quickly turns into a complete farce. An all out brawl ensues with the closing act resulting in a flying billiard ball breaking a gold fish bowl soaking the object of their affection. The lady then storms off with goldfish in her hair spurning them both.

"When life has you behind the 8 Ball. It's time to take your best shot."

The blurb on the back of our VHS Copy makes a good summary of the movie by saying this "... Kiss Shot is rich with emotion, wit, and extraordinary performances - a delightfully uplifting tale for the entire family." And it is! It is a serious comedy about a very responsible but desperate single mom who has to bring out her old cue skills to make that evil "balloon payment". Even non players that do not have the game under their skin and in their blood and who do not know one single thing about pool and billiards can appreciate and enjoy this movie.

Starring: the legendary Johnny Cash as "The Baron", and co-starring his wife June Carter Cash, Greg Webb as the "Cajun Kid", and Tracy Polland

Based on Johnny Cash's hit song and CMT music video "The Baron." I watched this movie years ago on TV and loved it! Basically the story line goes something like this... The "Cajun Kid" is the (Johnny Cash) Baron's estranged bitter son. A smart mouth boy who wants to be a man complete with a hot temper and a really big chip on his shoulder that needs to be knocked off.

Actress Tracy Polland (wife of actor Michael J Fox) is the quick and sassy girl who just makes the kid that much madder! But darned if he don't think she ain't cute and for a girl she can actually shoot a straight stick! And that is all I'm gonna tell you... Go buy your own copy, which is what i'm getting ready to do because "the poolmouse" and hubby have not seen and have been looking to buy this movie for years.

Bought it! Still enjoyed it. Yes! It is a older movie and reflects a time when movies were... well, it's family friendly which is not something most movies today even try to be. Don't get me wrong, I really enjoyed "Poolhall Junkies" but to be honest I even have a hard time letting a 15 yr old watch "Poolhall Junkies" even with me in the room mostly because of the language content. Yea! I know they've heard it all and seen too much of it. But still!

"Sometimes your last shot, is your first break."

Talented actress Famke Janssen has been a Bond girl in Golden Eye, the superhero Jean Gray in three "X-Men" films, and played a major role in the Netflix exclusive horror thriller tv series Hemlock Grove. So when she landed the starring role in Turn The River it was about time and she delivered a stellar performance. Incredibly, she had never even held a pool cue before this movie. But that didn't stop her, and she turned into quite the shot maker. Bets were laid on film day on how many times she would have to shot a particular shot before she finally made it with some laying odds that she never would. First take, that's right, she made each of her shots on the first try. A lot of bets were lost that day.

Kailey is helpless in her concern for her son's welfare. Having no visitation rights she watches wordlessly the signs of abuse, a broken wrist, scratches. Her son Gulley never speaks of what is happening at home in any of the letters they pass in secret to each other; it has all become all too normal to him.

His mother is tough, from the wrong side of the streets living in the shadows of backroom card games and smokey poolhalls, but seeing Gulley hurt and unable to do anything about it is just too much. She has to get him away from his father and the stepmother who does nothing to protect her son. She needs to get Gulley to safety. To escape across the border with her son to Canada and for that she needs passports. She needs money and only her exceptional skill on a pool table can get the kind of money she needs.

"There's no such thing as luck to a hustler."

Personally Andy and I were not too crazy about it when we finally got around to seeing it. However it does have a rather clever twist at the end.

Caught between two hustlers and a crooked cop, Jericho Hudson resorts to a clever con of his own to stay alive and in the game.

"Playing the Shots. Covering the Angles. Waiting for the Big Break."

In this just for fun New Zealand comedy drama three friends, Jack, Wayne and Thomas find themselves in over their heads with the local mob. So to bale themselves out they enter a high stakes pool tournament. But, they have a hard time staying focused due to the distractions of two beautiful and unbeknownest to them world class pool sharks who have been hired specifically to throw them off their game.

Jack Klugman stars as Jesse Cardiff, a man obsessed; a true billiard sports pool hall junkie who is more than just a little tired of being compared to Fats Brown, the best pool player who had ever lived, who had died 15 years earlier. Someone in the other zone must have heard him whinning because the ghost of Fats suddenly shows up to challenge Jesse to one game of straight pool to 300 for the title of "Best Pool Player of All Time."

Jesse is down right tired of being compared to the legendary pool player and very dead Fats Brown. Constantly bemoaning having to live in the great man's shadow, when suddenly Fats appears to grant Jesse's wish and play for the title of "Best Pool Player of all Time."

The story is the same as the original Twilight Zone episode of the same name with the exception of an alternate ending which had been written for the original episode but never aired.

I know we have not even touched on the movies, The Hustler or The Color of Money yet! Later additions to this series of article will include more movies and even TV series featuring a pool episode or at least a note worthy scene where the game of pool is played.